When your phone stops working, your first impulse is probably to start Googling for a way to do a smartphone fix it. It’s completely understandable to want to save money and time if you can fix the problem yourself, but there are some phone repairs that aren’t worth the risk.

We’re big supporters of people being able to fix their own belongings, but we’ve also seen so many disasters when people try to fix their phones without having the proper tools or training. Simple, affordable fixes are easily turned into a more expensive repair and no one is happy when that happens.

In this blog post we’re sharing the most common problems smartphone users face and whether a DIY smartphone fix is the best option.

A cracked screen is one of the most common ways people damage their phones. Whether it’s a small chip or a completely shattered screen, it needs to be replaced.

You can buy a repair kit for yourself, but actually replacing the screen requires specialized tools that the average person doesn’t just have lying around their garage. If a screen repair isn’t done correctly you can easily damage your phone more extensively and end up having to completely replace it.

At The Lab we’ve had customers bring in their phones after they attempted a smartphone fix and end up having to replace both the broken screen and repair other parts of the phone that were damaged by the attempted repair. It usually ends up costing you more in the long run to try to repair your phone’s screen by yourself. Conclusion = Don’t DIY

Over time the port that allows you to charge your phone might start to fail. This is commonly due to the fact that the port is a magnet for lint and dirt. You can carefully clean out this debris by gently blowing into the port (with your mouth, NOT with compressed air!) or a port cleaning tool to scrape out any visible dirt.

After you clean it out, the port should be able to hold onto your charger more firmly. If that doesn’t solve the problem, bring your phone into The Lab and we’ll help you fix it. Our repair experts clean out ports almost daily! Conclusion = Try DIY

If your phone is overheating, that can be caused either by a software or a hardware problem. Try turning off any apps that drain your phone’s battery life by constantly running and remove it from its protective case before powering it down.

Once your phone is no longer hot to the touch, try turning it on again and see if it stays cool. If your phone continues to overheat, don’t risk permanently damaging it. Power it down if it continues to be hot after you restart it, then bring it into The Lab and we can help you figure out what’s causing the problem and suggest a smartphone fix. Conclusion = Don’t DIY

Most modern smartphones don’t always make it easy for you to replace your battery. This means that most people waste money buying a new phone when they could have simply bought a new battery for their phone instead.

There are plenty of YouTube videos and online tips out there that tell you replacing a battery on an iPhone is something you can do at home, but most of the time that isn’t true. First you would have to make sure to buy the exact right battery for your phone, then you’ll need to use specialized tools to open your phone. There’s also a high probability that you’ll end up damaging your phone if you don’t use the correct amount of pressure to open it.

This is definitely a repair you don’t want to DIY as a smartphone fix. Our experts at The Lab have the training and tools necessary to safely replace your phone’s battery and extend the life of your phone. Conclusion = Don’t DIY

Most people have heard of the “rice trick” when your phone gets wet. Sometimes it works, but most of the time it doesn’t. If your phone got wet, you can try using a hair dryer to gently dry it but this is only safe if you keep the heat under 166 degrees Fahrenheit (75 degrees Celsius).

Another popular method we’ve seen people try is to use salt to draw out the moisture in their phones. While salt can work better than rice, it is also corrosive, so we don’t recommend trying that method to dry out your phone. Controlled, gentle heat is best and if that doesn’t work, you may need to replace your phone.

Remember: Don’t try to turn your phone on or plug it in while it is wet. Make sure it is completely powered down before trying to dry it out. Conclusion = Try DIY (carefully)

If you have an iPhone 8 or newer, you know exactly what we’re talking about. Back glass is a feature Apple added to it’s newer iPhone models and it’s part of what makes them look so sleek and modern. However, if you’ve cracked the back glass, it’s a repair that needs to happen right away before it gets worse.

This is definitely not a DIY procedure. If you attempt to remove the glass yourself, you’ll end up severely damaging your phone. At The Lab we have a laser machine specifically designed to allow us to remove damaged back glass and replace it. The whole repair takes just 3 hours! Conclusion = Don’t DIY

We use our phones constantly and they can slow down over time. If your phone is lagging, try clearing the RAM and closing apps you aren’t using. Delete apps and files you don’t need, especially photos and videos. You can move files to a cloud storage option automatically to help keep your phone free of clutter. If you have an iPhone, make sure you’re using the latest version of iOS.

Once you make those changes, go ahead and restart your phone. You should notice that it’s starting to run more quickly. Conclusion: Try DIY

Don’t Risk Losing Your Phone To A Bad DIY Attempt

One of the biggest reasons not to attempt a DIY repair on your phone is if you damage it yourself there’s no warranty. You risk having to completely replace your entire phone when you could have brought it into The Lab for a simple, convenient repair backed by our warranty. So why risk it?

The Lab is located in the heart of downtown Warsaw at 120 E. Center Street, Suite A. We’re open until 5pm Monday-Friday and until 2pm on Saturday. We love walk-ins and our certified repair technicians are always here to help, so bring in your phone now!

This blog post was originally published in March of 2020. It has since been updated to include the latest and most relevant information. 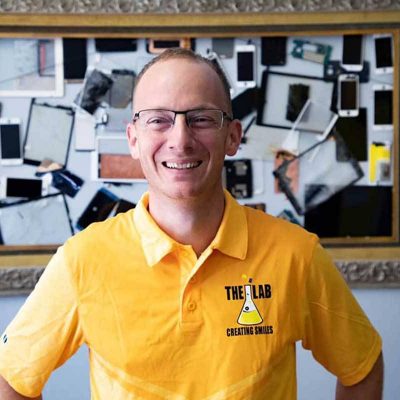 Lyle Schrock is the owner of Warsaw's premier electronic repair shop. The heart of The Lab is Lyle's commitment to make the world a better place one repair, one customer, and one smile at a time.

Everything You Need To Know About Liquid Damage To Your Phone

3 months ago by Lyle Schrock

12 Things To Do While Waiting For Your Phone Repair

4 months ago by Lyle Schrock

We Can Fix That: “Why does my phone keep crashing?”

2 years ago by Lyle Schrock

We Can Fix That: Phone Screen Problems

2 years ago by Lyle Schrock

Get tips, news, special offers, and updates from The Lab straight to your inbox!

Our Mission is to bring a smile to your face. We are a total electronic repair shop. We repair phones, tablets, computers, drones, microsoldering, etc. If we can source parts we can repair.